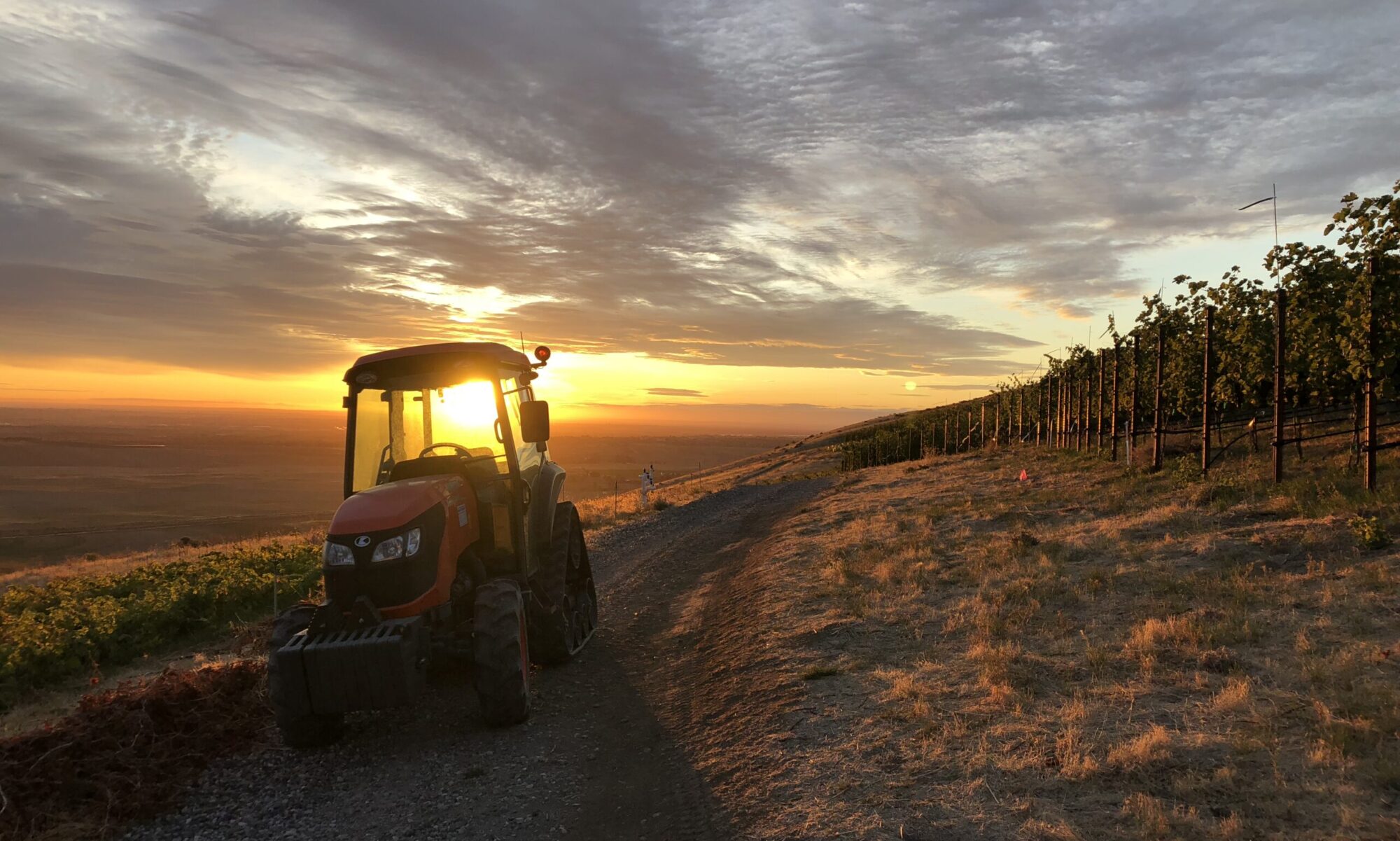 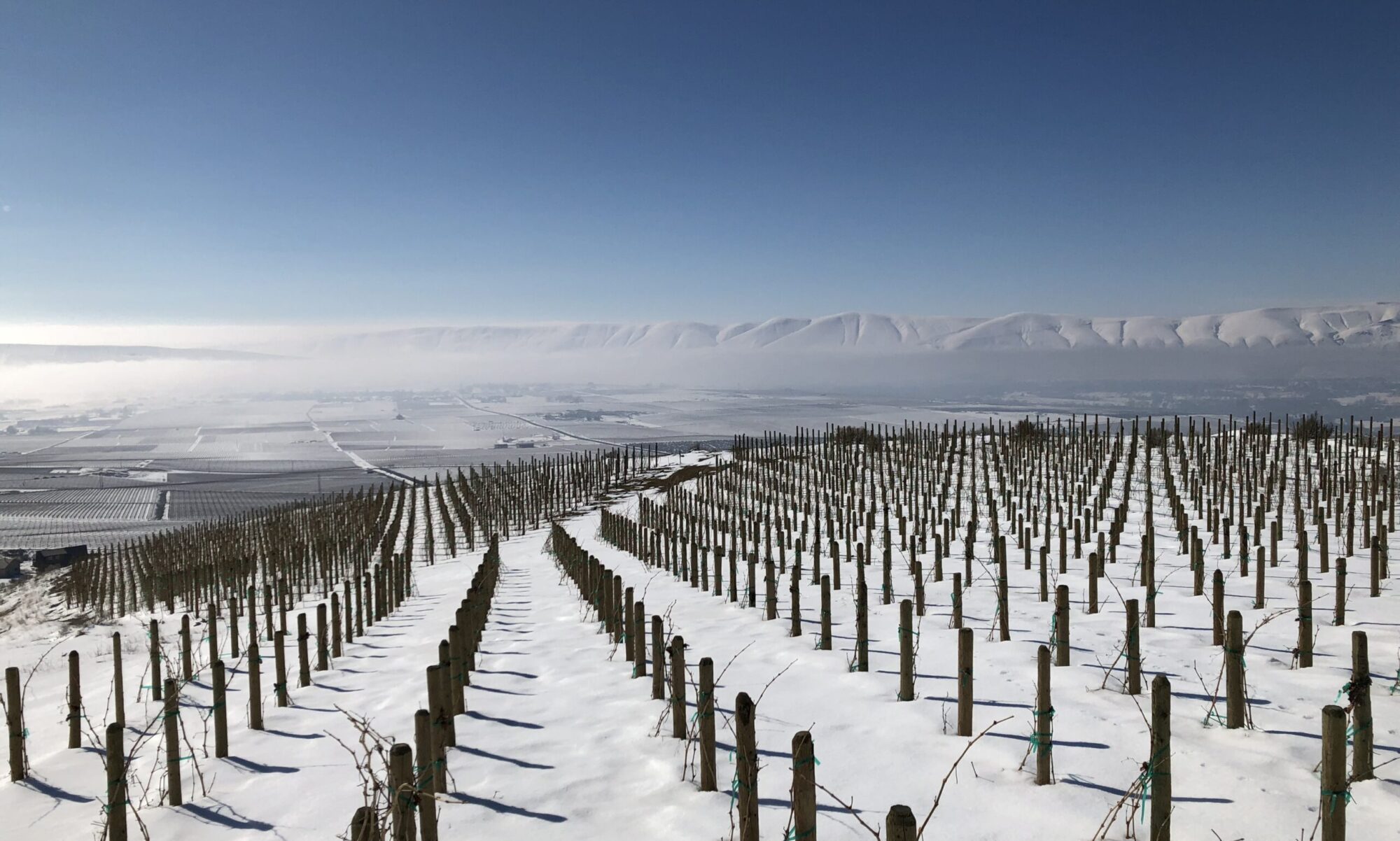 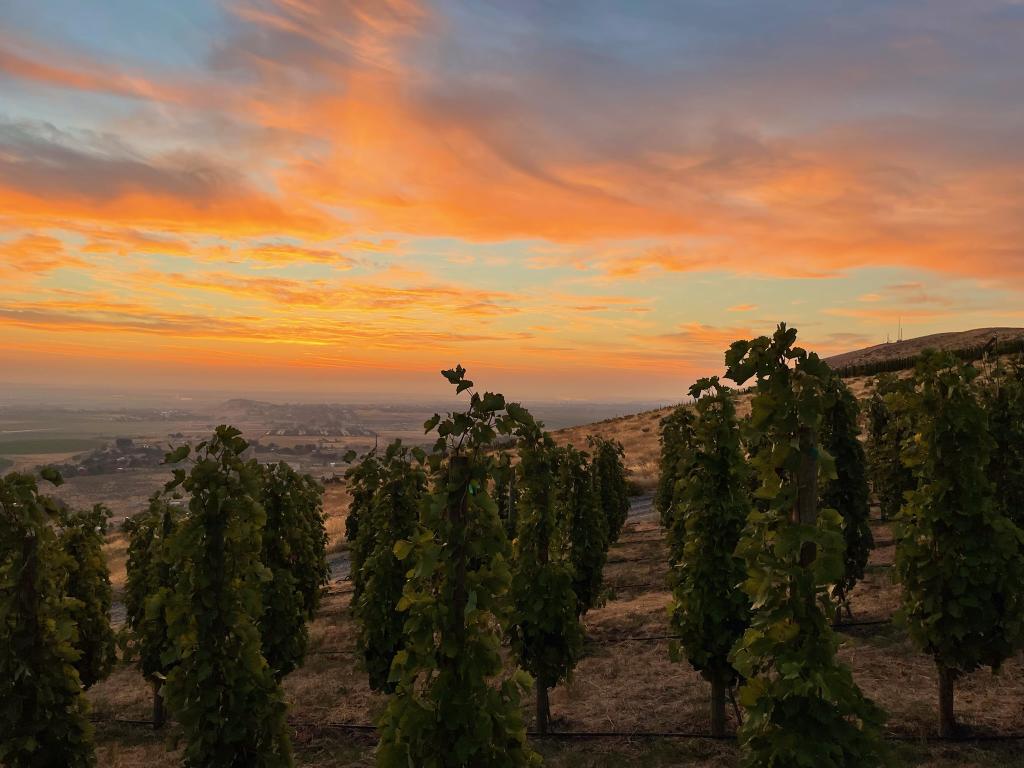 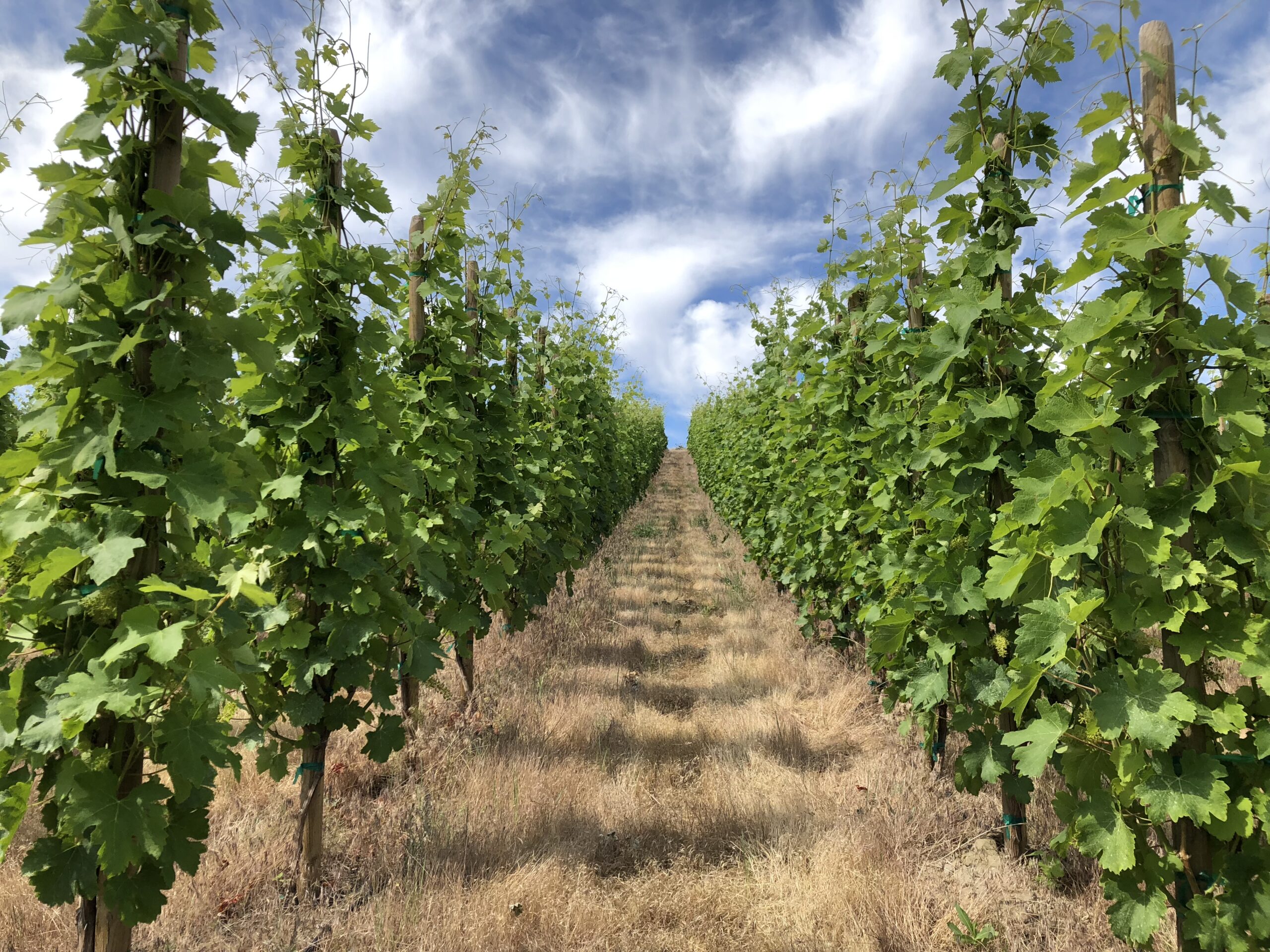 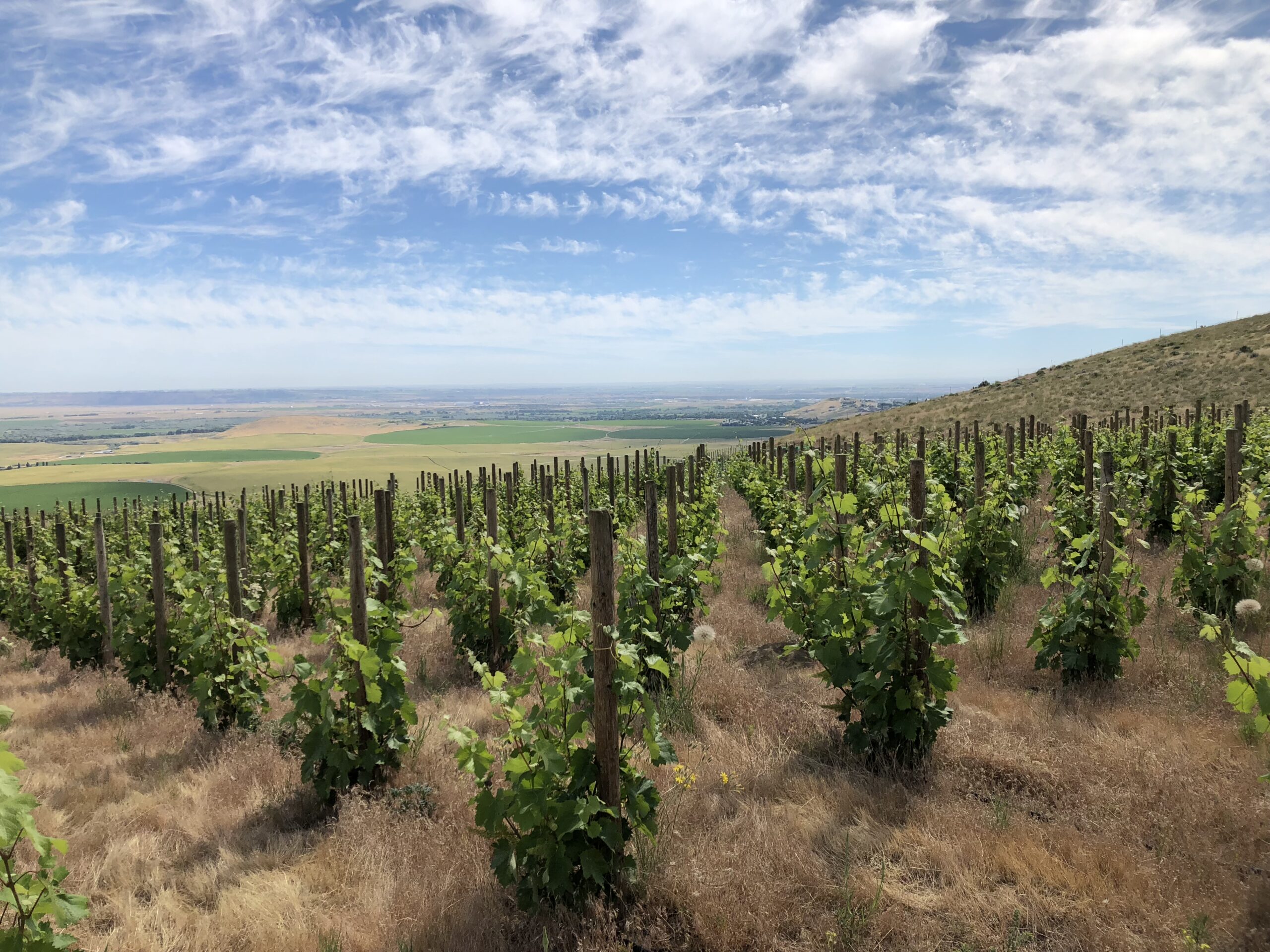 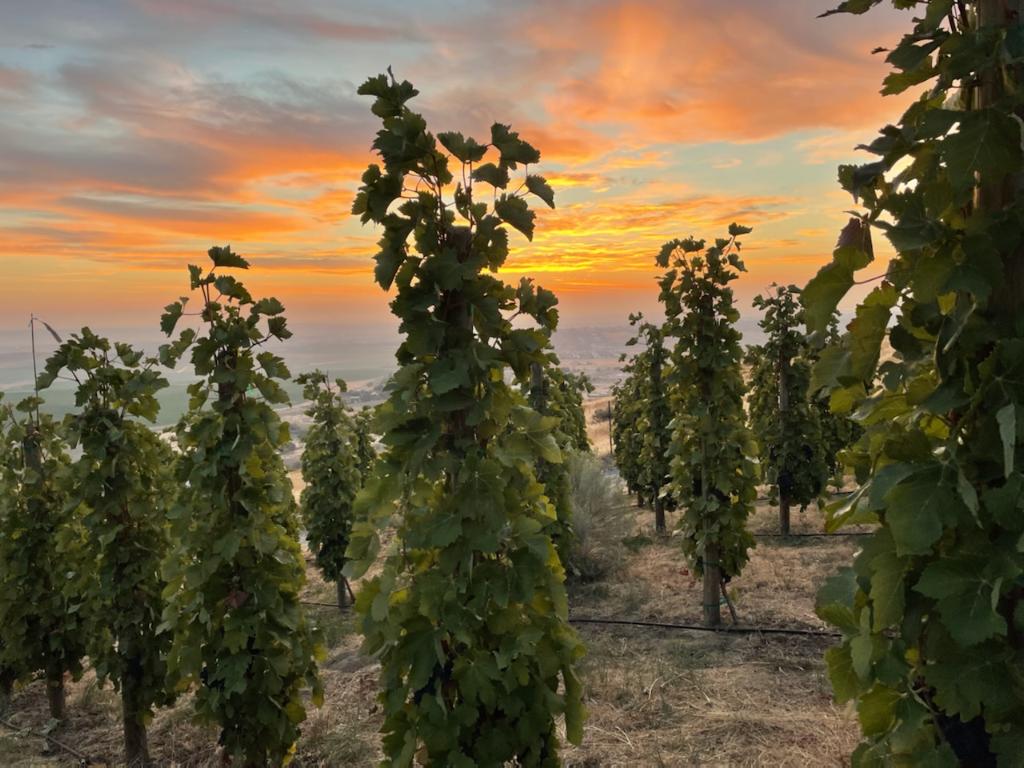 Stretching along the windswept ridgeline of Red Mountain in Washington State, WeatherEye is planted to 30 acres of Rhône, Bordeaux, and Spanish varieties.  We farm our vineyard as a collection of “micro-blocks” that are designed and managed in a full spectrum of densities and trellising methods matched to the soils, topography, and exposures of the site.  Two thirds of the vines are head-trained, typically to either a single stake (en echalas) or pruned to an open “bush vine” architecture—both are traditional techniques from the Rhône Valley of France, which we believe adds a unique dimension to the character of our fruit and wines.  Vine densities range from 300 plants per acre to over 4,000 per acre in our meter-by-meter blocks.  Climbing from 950’ to 1410’ of elevation, WeatherEye features extreme slopes and soils ranging from dune sand to fractured bedrock basalt.  The dynamic nature of this site gives us an incredible range of terrain and opportunities for growing wine grapes, limited only by our imagination.

“We started with a really interesting piece of property and a belief that we could try and make something great,” says Cam Myhrvold, who began purchasing land for what is now WeatherEye Vineyards back in 2004. “The plan was always to start as a vineyard, and if the fruit was really great and unique, then we’d follow that up with an estate wine project.”

It is hard to describe the extreme level of effort and detail that has gone into this vineyard without seeing it. There are currently 33 acres planted, with about 29.5 of them in production. None of the blocks could have been easy to plant. Some of them are on quite steep terrain. The soil often has a significant amount of fractured basalt. The vines must be hand tended and harvested. Most of the blocks are minute in size, tightly matched to the terrain.

“We feel like what we’re doing on the vineyard side is some pretty innovative stuff,” says vineyard manager Ryan Johnson, who designed and planted the site.

Johnson, who has more than 20 years of experience on Red Mountain, spent six months just walking the ground before planting to try and fully understand the aspects, soils, and wind patterns. In the end, he attempted to match clone and variety to trellising technique and location with an intensive level of detail.

“So much of this was kind of an experiment,” Johnson says. “It’s a confirmation that terroir is important, viticulture is important, and so is the clonal material that we use.”

WeatherEye currently works with 10 hand-selected wineries, with many more clamoring to access the fruit. The choice of Alexander to craft the estate wines was both inspired and an easy one. Johnson had been working on the nearby Force Majeure project but was ending his tenure right as Alexander was starting at that winery.

“He’s a top tier winemaker, making wines at the highest level,” Johnson says of Alexander. “I think there was this mutual drive to be able to work together at some point.”

Meanwhile Alexander’s interest in working with WeatherEye fruit only increased as he saw the vineyard come to fruition. “It’s an incredible amount of work, and a lot of thought has gone into it,” he says of the site.

The first WeatherEye estate wines were made in 2018, with a Syrah and Grenache at a mere 140 total cases. That expanded to a still-meager 400 cases in 2019. The 2020 production will be double that, with white wines added to the program. 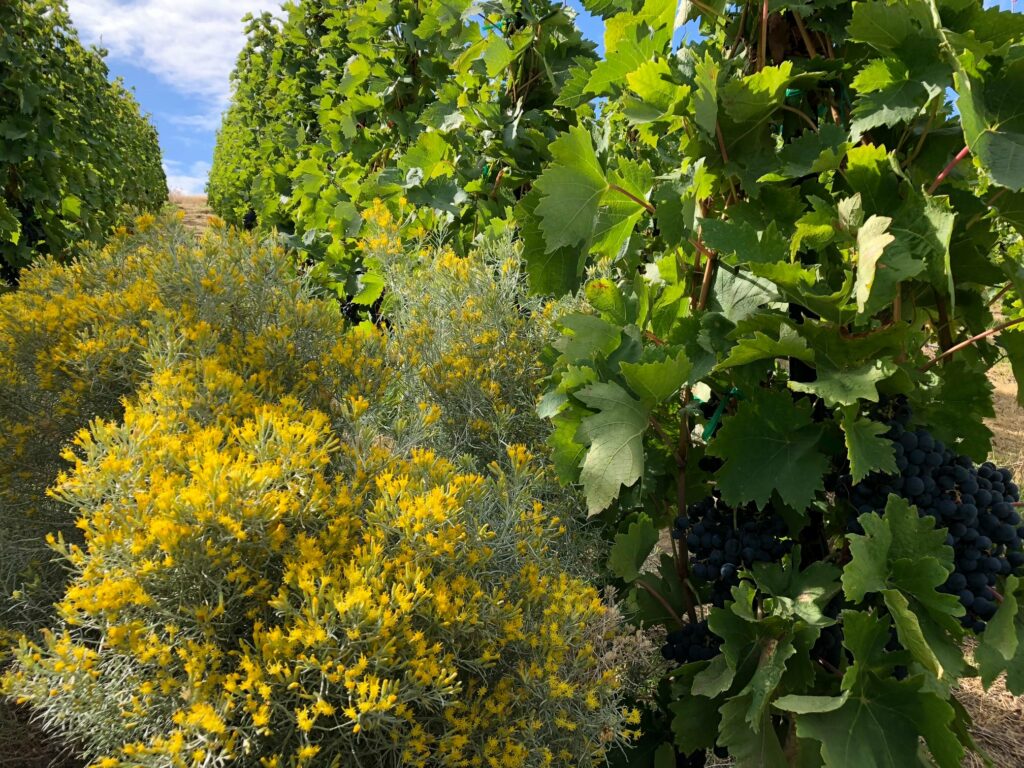